We are pleased to announce that the newest release of CygNet version 9.6 is now available from the CygNet Software download site for installation or upgrade.

CygNet 9.6 contains many exciting features, enhancements, and updates; the most significant enhancements are listed below:

Email Notifications in the GNS

Several new and enhanced controls, configuration and scripting options, and improved usability features have been implemented in Canvas v9.6.

The most exciting of these items is the new Map control, which gives geographical context to your facility data. The map supports multiple map layers, which can be used to display CygNet facility location data via three types of visual items, including:

The following images show a map control in Road and Aerial mode, driven by a Tag Chooser with an associated CygNet Grid showing data for the facilities displayed on the map. 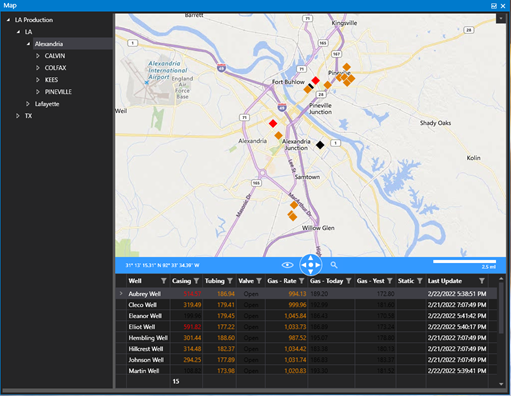 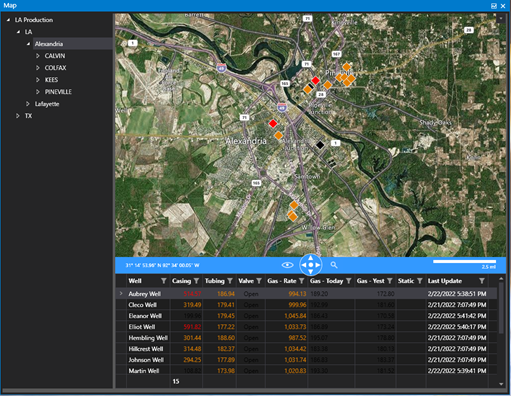 The following video demonstrates a Map control driven by a Tag Chooser. As the user scrolls (zooms) into the Louisiana region on the map the facilities included change and the associated CygNet Grid changes to reveal facility data.

See the CygNet v9.6 Release Notes for a list of the other new and modified features in Canvas v9.6.

Enhancements, modifications, and fixes have been implemented in several remote device EIEs and device template files in this release. Some highlights include DNP3 EIE and DNP3 Emerson EIE support for a special built-in UIS command to issue an integrity poll, plus automatic polling to trigger configured commands. EFM support has been added to the DNP3 Emerson EIE for Emerson FB3000 flow devices. And a new driver, the Modbus Pickford EIE, has been added to support the DrSCADA P700 Wellhead Manager pump controller field device.

See the CygNet v9.6 Release Notes for a list of the other new and modified EIE features in CygNet v9.6.

An array of enhancements, modifications, and fixes for CygNet Measurement and Dispatch are included in CygNet v9.6 to improve performance and usability. Note that Dispatch v9.6 requires CygNet Bridge API v4.5 to operate.

See the CygNet v9.6 Release Notes for a complete list of the Measurement and Dispatch changes.

See the CygNet v9.6 Release Notes for a complete list of the CygNet Bridge API changes.

A new version of the CygNet Operator Mobile App v2.3 for iOS mobile devices is now available from the Apple App Store. The app allows field operators to view current data, trend historical data, and view and acknowledge both CAS and GNS alarms in a single operation on an Apple iPhone or iPad.

As in v9.4 and v9.5, our product documentation is available online. This is a great way to keep up to date with the changes within the software, as well as simplify finding relevant data quickly and efficiently.

You can also check out other useful release documents:

We encourage all users to upgrade to the latest version of CygNet as soon as possible. Please refer to the release notes for more information on new features and functionality that have been added to CygNet v9.6.

We are currently working on new features for the CygNet community to be released this coming year. Watch the CygNet blog for announcements or attend the 2022 Weatherford Enterprise Software Conference later in the year for a preview of what’s to come in CygNet v9.7.