Relative Facilities, Canvas, and You

Relative facilities have been around in CygNet in some shape or form for many years.  And along the way, there were enhancements made to Studio to assist in creating multi-facility templated screens based on a relative linking model.  However, with Canvas, that relative linking functionality and resolution was baked into the product at the very beginning.   In this post, I’m going to discuss some design considerations and implementation ideas that I hope will help as you create Canvas screens.

The relative facility model used by Canvas and in the CygNet .NET API is based on a linking technique and facility filters. Facility filters are used throughout the CygNet application to obtain a list of facilities that satisfy a given criterion. For example, a filter of “facility_type=‘GASMTR’” would return a list of all gas meters for a given Facility service.

would produce the gas meter facility that is linked to the  ‘SITE.UIS::ASH_WL’ facility. If this filter does not produce a single facility, then additional filter attributes are needed to ensure that a single facility resolution occurs. Here we are using facility_attr3 as the means to “link” two facilities. In this case the ASH_GM facility would have ‘SITE.UIS::ASH_WL’ as a value for facility_attr3.

This example highlights the first rule of relative facility resolution. Resolution must result in a single facility. Otherwise, if we try to build an Ash Well screen to show the gas rate of the well, how do we know which facility to use if we return more than one resolved facility?

Here, paths are created from every definition to every other definition in the chain. For reference, the following table shows the paths created for the Well relative facility definition shown in the example above.

These resolutions can occur because each link in the chain resolves to a single facility and each definition is unique. This represents the second rule of relative facilities. Relative facility definitions can only be linked once, that is, each facility can only have one parent.

Consider this modification to our example:

Here we have the same definition, Gas Meter, linked to both the Well and Compressor definitions. So, if we were to build a Plunger screen and wanted to show the Gas Meter on it, which Gas Meter definition will be used?  Which one do you want to show?  This conundrum represents the multi-parent problem. And this problem is exacerbated when you have Order-in-Type-based definitions.

Here is an example of that. 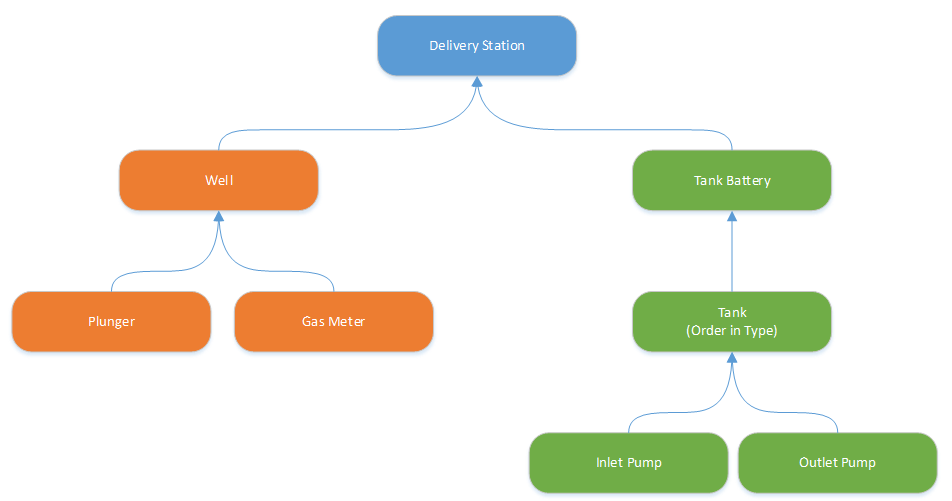 For this reason, the Relative Facility Definitions configuration dialog within Canvas does allow you to create these multi-parent configurations. However, in order to avoid resolution issues with these configurations we need to employ some clever design techniques when building screens.  Also, in the upcoming 9.4 version of Canvas, we have added the ability to create a single definition for this situation and specify the order-in-type attribute.

There is a special case when resolving relative facilities. To illustrate this, consider this simplified configuration: 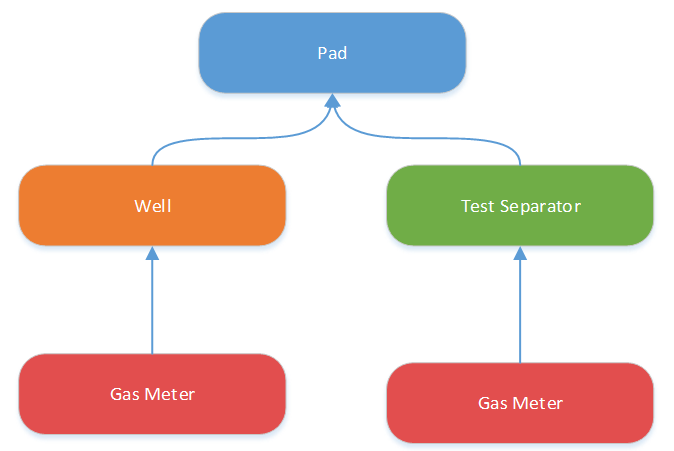 With this in mind, we can use some special Canvas controls to help us build a screen that will resolve facilities in the way we want. 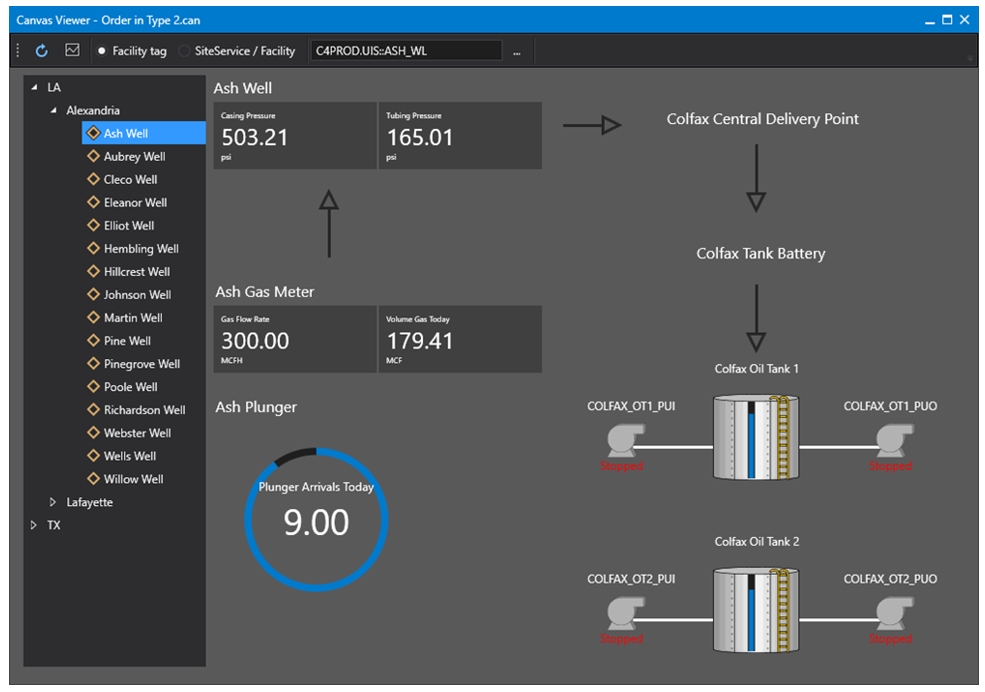 The challenging part of the screen is with facility resolution for the Tank 1 and Tank 2 controls on the lower right. The Tank definition is configured for Order-in-Type. And as such the Inlet Pump and Outlet Pump definitions have multiple parents. So, we cannot have controls representing the Inlet Pump or Outlet Pump directly on the screen. To solve the issue, we are using a Canvas Object on the screen to handle the facility resolution.

In Design mode the Canvas Object looks like this:

Here the two controls in the center depicting the tank level (a vertical Linear Gauge control overlaid on a tank Image) and the facility description (a Text Tool) are configured to use the screen’s facility. The Inlet Pump and Outlet Pump controls (Text Tools (depicting facility ID and value) and an Image) are configured to resolve the screen’s facility to either the Inlet Pump or Outlet Pump relative facility definition. This Object will use the special case in the relative facility resolution from above to resolve to the right facility.

The technique used here is to split up the relative facility resolution in the event you have a multi-parent situation. In this example we had that at the Tank and Inlet Pump/Outlet Pump level. If there were further multi-parent configurations after the pump, you use the same technique there by creating additional Canvas Objects.

The built in relative facility functionality in Canvas allows us to create multi-facility templated screens right out of box.  Just keep these few things in mind when building your relative facility definitions.